This screen capture should tell you something about the media frenzy, their defensive posture of the Republican Party, and how low Politico can go...: 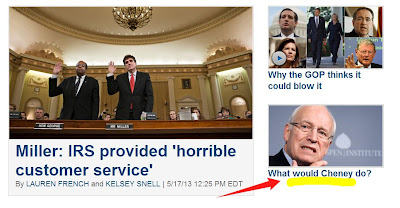 The IRS bungling should have pointed out the mass fraud by political groups to gain tax exempt status, forcing Americans to pick up the tab for their partisan candidates. The defense of tea party organizations as providers of "social welfare," a term they recently denounced, is laughable. Their public service to "teach" the Constitution is insulting. Perhaps I'm teaching the pubic about how bad Scott Walker is to our future.

What would Cheney do? Here's what this whole narrative is getting at:


What Would Cheney Do? (He) fashioned a distinctly different school of thought about how to operate in the midst of a Washington storm. That philosophy, in a word: defiance. Don’t feed bodies to the Washington wolves through resignations and firings. The pack will just get hungrier. After Obama announced the IRS’s acting director was resigning Wednesday, various Republicans called Thursday for a broader IRS probe, a special prosecutor and criminal charges to be filed … Don’t accept the premise of partisan critics and commentators that some controversy or another is genuinely a big deal. That projects weakness, demoralizes supporters and suggests the opposition is on the level, rather than driven by self-interest and hypocrisy. Note that the release of emails about Benghazi talking points only generated GOP calls for additional records from the aftermath of the attack.