Now Republicans are all wrong about Medicare Spending too.

Mother Jones may give Dumb Ron Johnson and Rep. Paul Ryan something to think about...are you kidding? Well, they should think twice of course, but won't. Johnson and Ryan want to delay Obamacare for Americans because implementation will only show them for the hucksters they are, and trash their doom and gloom predictions. After all, every other industrialized country has cheaper and better coverage than the U.S., so it's not really a big surprise, except to them. 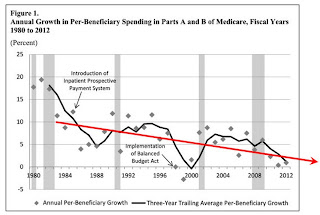 Care: Medicare Costs Are Down, Down, Down, By Kevin Drum: Last week brought some confirmation of this from the Congressional Budget Office. Michael Levine and Melinda Buntin took a look at Medicare spending per beneficiary over the past three decades and came to a very similar conclusion: "Growth in spending per beneficiary in the fee-for-service portion of Medicare has slowed substantially in recent years. This is good news, but in fact, it's even better news than it seems at first glance. Medicare plays a big role in setting rates and spending priorities for the entire health care industry … with Obamacare's cost controls set to kick in over the next decade, we could be entering a virtuous circle of reined-in health care spending for years to come.