Walker has no business celebrating Martin Luther King Jr.'s March for Freedom. None.

Holy crap, did this just happen? 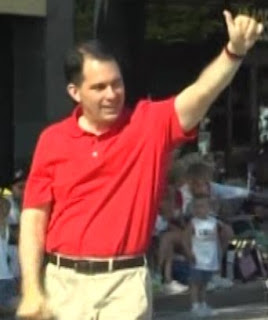 At the same time:

Gov. Scott Walker says protesters at the Capitol should "follow the rules" and get permits. Walker restated his position Wednesday as Capitol Police arrested a prominent union leader during the daily lunchtime singalong. Wisconsin State Employees Union Executive Director Marty Beil was led away in handcuffs.

To Walker, King's use of out of state protesters and union thugs would probably delegitimize the movement if it were being held today.