Walker “Open for business?” Not for the Enemies of Conservatism, like Wind and Solar.

Authoritarian control by Scott Walker and the Republican majority has gotten little traction outside of this blogs coverage. Has “authoritarian” become another one of “those words” relegated to the past? I guess it has the way the media circles around the obvious.


As a result, Democrats, liberals and progressives have been made completely irrelevant under the Walker Authority. Those days are gone, wiped off the books. Take the liberal whack-a-doodle “idea” of wind and solar energy.

Just for spite, forget about it, despite the plummeting costs that now make is competitive: 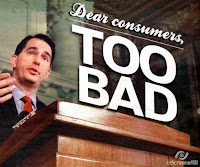 Cap Times-Mike Ivey: Efforts to develop the solar and wind energy industry in Wisconsin have taken another hit, although not a completely unexpected one. Under orders from the Public Service Commission, the state has stopped offering grants to help homeowners and rural residents install solar or small scale wind projects.

The commission last year voted to commit 75 percent of that funding to biofuels, with the remaining 25 percent going to solar and wind projects. So to maintain a 75-25 split in renewable spending for 2013, the commission ordered a halt to the solar and wind grants through the end of this year.

The suspension of the grants comes as Wisconsin continues to lose ground to other states in pursuing clean energy. “Other states like Minnesota and Georgia have adopted pro solar policies to take advantage of this rapidly growing industry sector,” says Clean Wisconsin executive director Tyler Huebner. "How does Wisconsin gain from discouraging investment in clean energy and driving businesses to locate in other states?”

Wisconsin doesn't gain anything, accept that it proves an important point about Walker and the Republicans; the days of liberal policies are over. Welcome in the new authoritarianism.
Posted by John Peterson, Democurmudgeon at 8/09/2013 09:39:00 AM