Walker laid it on thick the other day at a Republican Party summer fundraiser in Montgomery, where southern tea party dummies "baa, baa" in unison.

First, the false premise, required to make the following statement seem like a solution: 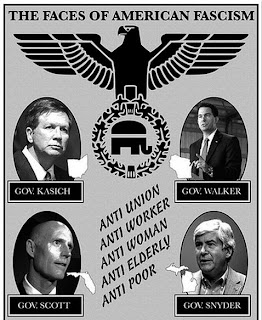 Ass-backwards isn't it? There's that elusive jobs thing again. If we did create jobs first, which Walker can't do with his policies, people wouldn't be dependent on government. But that would require "work," it would require debate, even ideas. Kicking people off the programs first is so much easier and fulfilling.

Let's face it, Republicans don't have courage, or they wouldn't be gerrymandering their districts and suppressing the vote. But when they do talk about "courage," they're really telling us we won't like the laws their passing for pure ideological reasons. Their leaders, not followers of public opinion:

“We need to embody courage at the local level, at the state level and Lord knows at the national level,” Walker told the crowd. “In times of crisis what people want more than anything is leadership,” he said.

We've seen that kind of leadership before, throughout history, and it didn't turn out well.

Walker wants to empower people by financially crushing them with job insecurity, low pay and benefits, and the uncertainty of disappearing safety nets. Desperation is the newest job qualification:

Walker believes education grows on trees, and is not derived from educators, research and all those professionals we call bureaucrats:


“We care about (children's) education, not about the education bureaucracy,” Walker said.