Rising employer health care costs are coming right out of an employees pay check in lower wages and lower wage increases. The idea of getting rid of the old employer connection with coverage is picking up steam, which means a single payer system isn't too far off. 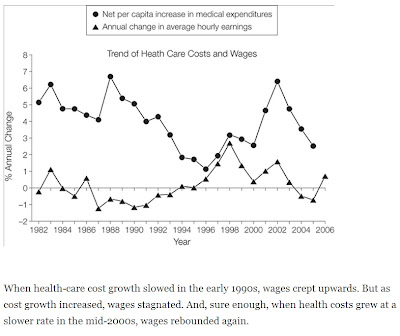 The National Journal published a widely-shared article Thursday comparing premiums in the employer market to those in the individual market, exploring what would happen if employers dropped coverage. Clara Ritger, the author, concludes that “for the vast majority of Americans, premium prices will be higher in the individual exchanges than what they’re currently paying for employer sponsored benefits.”
That conclusion leaves out crucial information about how employers pay for health insurance–and what else they would do if coverage got cut. National Journal’s analysis focuses on … (what) employees might see deducted out of each paycheck. It ignores the really big contribution that employers pay and that economics research shows to come out of workers’ wages.
The total premium, including employer and employee costs, come at the cost of workers’ wages. This is known as the wage-fringe tradeoff. “What we do know is that when health-care costs go up by a dollar, wages go down by a dollar.”

Amitabh Chandra, another Harvard economist, for his part, says he’d actually prefer it if his employer, Harvard, booted him onto the marketplace–and gave him the increase in wages that his research suggests he would receive. “I’m paying for a super generous plan from Harvard right now in the form of lower wages,” he says. “I could take a higher wage and spend some of it on a nice summer vacation.”