The following story won't faze my conservative friend in Milwaukee one bit. What's in the past....

Well, those same tea party dunderheads are now going to cost the rest of us tens of millions of dollars of our hard earned taxpayer money to upgrade and build onto the Hiawatha train line from Milwaukee to Chicago. 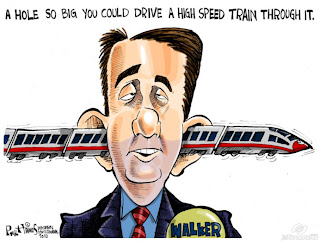 jsonline: A new rail concourse at the Milwaukee Intermodal Station, which serves Amtrak passenger trains and freight trains … it's finally on track building a mezzanine spanning five tracks, with elevators and escalators ... and an improved pedestrian tunnel underneath the tracks that passengers can use in emergencies. The project hit several bumps over the years.

Previously, Gov. Jim Doyle's administration planned a $20 million rehabilitation of the train shed that would have been fully funded through an $810 million federal high-speed rail grant. But Scott Walker campaigned against high speed rail in his run for governor and, after taking office, refused the grant money, putting state taxpayers on the hook for more of the cost of the upgrade.

Previous cost estimates put the current project in the $17 million range … About 55% of the project is federally funded, and Wisconsin taxpayers are picking up the rest.

Walker continues to cost Wisconsin taxpayers more and more money, borrowed money in many instances, while our federal taxes get sent somewhere else. Don't you love small government?