Wisconsin Reporter’s M.D. Kittle (Dec. 2012) reminded me of two Republican lowlifes, who spewed phony charges of being “victimized” and beat up by liberal thugs.

Why they thought they had to be physically bruised and battered is anybody guess, but voters believed their stories for a while, maybe in some cases still do. 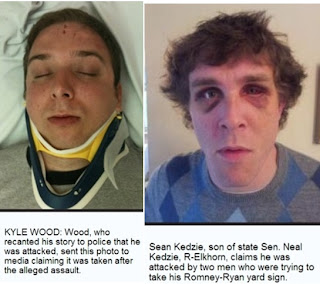 Police say the case of Kyle Wood, the openly gay Republican campaign volunteer who in late October recanted his story that he was beaten up because of his political affiliation and sexual orientation, is in the hands of Dane County District Attorney Ismael Ozanne, awaiting a formal decision on charges. Just hours before police announced that Wood had recanted, conservative news organization Media Trackers reported that Wood had provided harassing text messages that Media Trackers claimed came from Pocan’s spouse. Those texts turned out to be bogus.

Thanks to one reader who passed along this final update on Kyle Wood from Cognitive Dissidence:


An event happened recently that flew under everyone's radar - Kyle Wood was sentenced to 30 days in prison.

Not prison, but jail, but what does it matter.

Elsewhere, Whitewater Police Chief Lisa Otterbacher told Wisconsin Reporter this week police still are “working on a few things” in the alleged assault on Sean Kedzie. Kedzie, the son of state Sen. Neal Kedzie, R-Elkhorn, in October told police he was attacked by two men who, Kedzie said, attempted to take his Romney-Ryan political sign. Otterbacher said investigators met with Sean Kedzie last week, but the investigation is “kind of at a standstill.”