Republican Sen. Dale Schultz Gets It.

I couldn't let this story go, so here's my take on the important points in the Cap Time's Jack Craver article on Republican Sen. Dale Schultz.

Before it fades into archival obscurity, I thought Schultz' critique of his own party's political control and problems hit the mark, which means that many on the right know just what they're doing, but just can't let the opportunity slip by no matter how ugly it gets. And it's killing this state. I'm mean really, who can be satisfied with the anger and political division eating away at the character of Wisconsin?


ON UNIONS: Schultz tried to broach a compromise with the governor in which 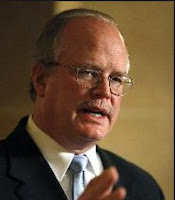 “It was about busting unions,” Schultz explains … while other Republicans cast unions as nothing less than public enemies, Schultz sees them as an important check on the power of employers.

WHY WE PROTESTED-Schultz Gets it: “Absolute power is a dangerous thing,” he says. “When it’s always a win-lose situation and one side’s always losing, you strip people of their dignity. They lose hope and they get angry. I think that’s what 125,000 people came down to Madison to tell us. They didn't believe what was going on was fair.”

Schultz believes those who think independently or seek compromise are viewed as threats by the special interests, which finance campaigns with the expectation of dictating policy once their preferred candidates take office. “I think increasingly legislation is coming to the legislature entirely pre-packaged,” says Schultz. “And anybody who wants to work on it, who wants to think about it, or wants to change it gets in trouble.”


Case in point: The mining bill. “Over in the Assembly this bill arrives, nobody is the father of it until (the Republican leadership) all stood up and said, ‘I’m Spartacus,’” he chuckles. “Silly us that thought we were going to have some opportunity to impact something,” he adds.

“When some think tank comes up with the legislation and tells you not to fool with it, why are you even a legislator anymore?” he asks. “You just sit there and take votes and you’re kind of a feudal serf for folks with a lot of money.”