The Walker sh** hit the fan today, and just in time for his reelection. According to the latest report from Politifact regarding Scott Walker's grandiose jobs promise and pander:

On Aug. 26, 2013, Walker talked about what happened before he took office. And he referred to the promise as a "goal.”

Here's the offending, contradictory clips...see if you too can detect any difference between now and then:

"My goal wasn't so much to hit a magic number as much as it was, in the four years before I took office, when I was campaigning, I saw that we lost over 133,000 jobs in the state. I said, 'It's really not about jobs, it's about real people, real jobs like those here, and more importantly, affecting real families all across the state,'" Walker told reporters. 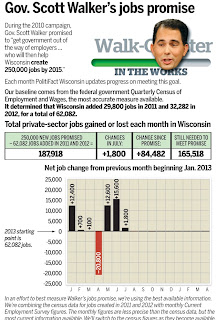 We asked Walker's office about the report from Merrill, and whether the governor was backing away from the jobs promise.


"Absolutely not,” spokesman Tom Evenson said in an email. “In that story, Governor Walker was providing the context behind the goal.  Governor Walker set the goal because it’s about real people and real families all across Wisconsin.  Governor Walker’s number one priority is helping the people of this state create jobs.”

It's worth noting that in his short statement, Evenson three times refers to his boss's top promise as a "goal.”