NEWS FLASH: Republicans propose Voucher Accountability Measures. Where have we heard that before...from the Democrats maybe?

I found this headline and story politically deceptive, and intentionally beneficial to state Republicans. 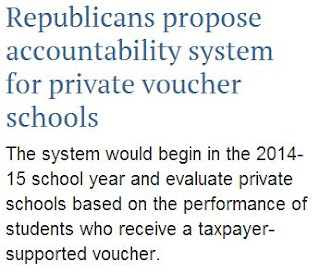 Gee, it's all the Republicans idea.

I guess it really didn't matter the Democrats have been screaming about this for years, since the Milwaukee voucher program began in the early 90's.

Democrats were just being partisan as usual, urged on by their ultra liberal base of socialists union thugs.

Now suddenly, on their watch, it's all the Republicans idea, because someday they might be held accountable for all the voucher failures and bad test scores. Remember, the voucher push was meant to be a temporary movement to instantly privatize schools, leaving Republicans free to move on. If you don't like the schools, talk to the new owners. See ya!

But taxpayers are starting to catch on, slowly but surely:


WSJ: Democrats have criticized Republicans for years for expanding the state’s voucher program without having accountability measures in place. Sen. Jennifer Shilling, D-La Crosse, said she plans to introduce a bill in the next few days that would address other concerns by voucher school components, such as that they don’t require licensed teachers or background checks and aren't subject to the state’s graduation standards or open records law.

“It fails to address most of the pressing issues that are facing students and parents,” Shilling said of the Olsen/Kestell bill. “Our proposal will have a lot more significant steps to increasing oversight.”


Sorry Sen. Shilling, we may have to wait another 25 years for addressing those other pressing issues.
Posted by John Peterson, Democurmudgeon at 8/15/2013 01:13:00 PM