Real Scott Walker Record could be Troublesome for another term as governor.

Sen. Kathleen Vinehout posted another wonkish and detailed breakdown of Scott Walker myths at Uppity Wisconsin. I simplified it to the point that even my conservative friend in Milwaukee could understand. Liberals, progressives and Democrats can simply check out the whole explanation at Uppity, but for a quick bare-bones look, here's what I came up with from our potential candidate for governor:

Sen. K. Vinehout: “The State is spending less.” “This budget took a deficit and turned it 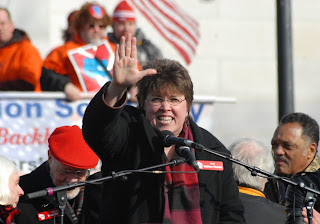 into a surplus.” “Wisconsin has paid off its debt.” Which of these are true statements regarding the new state budget?

The answer is NONE of the above.

The State is spending less: The nonpartisan Wisconsin Taxpayers Alliance … the 2013-15 budget spends $4 billion more than the previous. In fact, state spending is greater than it has ever been in Wisconsin’s history.

Deficit to a Surplus: the recently passed budget spends more than it is projected to collect in revenue. A recent report from the LFB pegs this deficit at the end of the 2015-2017 budget at MINUS $545 million.

The third myth says the state eliminated the debt. This is false. In fact, state debt reaches record levels in the 2013-15 budget. Debt is borrowing and must be paid back. New borrowing only adds to the debt. As a result state debt reaches an all-time high of $14.7 billion - or about 101% of general tax revenue.

There are so many other reasons...jobs is just one, but that's for another time.