Taxpayer Subsidize Churches to the tune of $82.5 billion a year, even when they get political. Where's the separation there?

We should remove the tax exempt status of churches. They're already breaking IRS rules by endorsing candidates during church service on "Pulpit Freedom Day," an in your face challenge they hope will go to the conservative activist supreme court.

I believe churches that play politics shouldn't get a tax exemption, and so do a lot of other people.


Policymic: The specific regulation against pulpit politics stems from a 1954 amendment that then-Senator Lyndon Johnson sponsored, stating that in order to retain their tax-exempt status, churches must refrain from direct political activity (the right points to Johnson's reelection campaign, which faced stiff opposition from two local nonprofits, as the motivation behind the amendment). Between the inauguration of the income tax in 1894 and this amendment, churches enjoyed tax-exempt status without any regulations on their political speech. From the IRS’ perspective, placing limits on churches’ political speech doesn't have anything to do with a particular dislike of churches. Rather, if churches are allowed to make political speeches from the pulpit, then the whole system of tax exemptions would stop making sense.

But think of the massive subsidies taxpayers are giving churches to preach the endorsement of political candidates. It's mind boggling, and maybe churches that do break the law should be pursued and lose their tax exempt status: 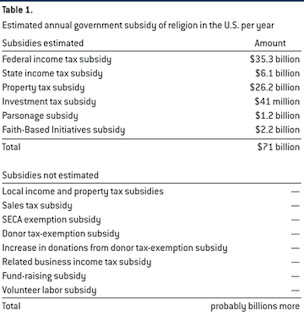 WaPo: You give religions more than $82.5 billion a year: If, all of a sudden, churches, synagogues, mosques and the like lost their tax privileges, how much tax revenue would that generate? Ryan T. Cragun, a sociologist at the University of Tampa, and two of his students, Stephanie Yeager and Desmond Vega, took it upon themselves to figure it out. They’re not exactly disinterested parties; their research appeared in Free Inquiry, a publication of the Council for Secular Humanism. But Cragun is a serious sociologist of religion and the data seems to check out. The full scale of subsidies religions get is pretty staggering.

Of course, these subsidies do more than reduce revenue. Property tax exemptions, in particular, distort real estate construction decisions and allocate more land to religious entities than would otherwise be the case, which drives up rents for everyone else (especially since religious groups tend not to buy property in high-density, skyscraper-style developments and instead get a whole lot of land for themselves).

Labels: Tax exemption for Church
Email ThisBlogThis!Share to TwitterShare to FacebookShare to Pinterest