Forget about people going bankrupt over health care costs, or losing their homes, or dying prematurely, or being turned down for insurance, or seniors paying into the donut hole, college kids going without care, or not being able to afford health care in the first place. 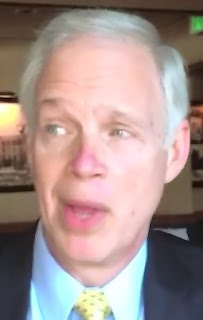 What about your employer’s profits? Have you even thought about that, huh?

jsonline: The US Senator told a small group Tuesday they should tell their employees that Obamacare could be dangerous to their employers' bottom lines, the Des Moines Register reported.

Surprisingly, the owner of a fast food chain isn't buying it:

Kevin O’Brien, who owns nine McDonald’s restaurants in the Iowa City area, told the senator that he is frustrated by Obamacare, but he understands his employees’ desire for more affordable health insurance. They tell him Republicans need to be clearer about what they would do instead of Obamacare. “All we hear is, ‘repeal, repeal, repeal,’” O’Brien said.

Yeah, what about that? For Johnson, he's still pushing the self-rationing and dangerous plan we know as health savings accounts. It lets insurers off the hook for big dollars, premiums go up year after year while deductibles get higher and higher, and it forces people to ration care and put off getting treatment. That raises the cost of care for everyone over time and leaves patients with advanced diseases, even death.