The Mukwonago School District treasures its tradition of racism, and has decide not to obey law, and stick with their insulting mascot. They’ll show us. Why not change the mascot to the Fighting Irish Yoga Masters, pictured here?

Mukwonago would love to change the law, but can’t right now, so they've decided to hedge their bets and break the law until it’s changed. Amazing? And that's what "law and order" under our state’s current Republican administration looks like. It's a system of games and favors.

Republicans have never obeyed the laws they didn't like.

And this isn't just any law either. It’s been tested in the courts already, and Mukwonago lost. Still, Republicans are in charge, and the district hopes it can continue to use their none to popular mascot. Mukwonago adults are setting a fine example for their kids, aren't they? 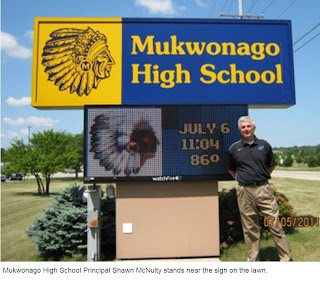 jsonline: On the eve of a state-imposed deadline for the Mukwonago School District to changes its Indian nickname, the likeness of an American Indian still adorns the school's marquee along W. School Road and the district appears intent on defying the state order. The district could eventually face fines of up to $1,000 per day.

As of Wednesday, "nothing's changed" with regard to the district's decision to ignore the order, according to attorney Sam Hall, who is representing the district. Hall said the district was still prepared to fight any fines should they be assessed, but that, as he told the Journal Sentinel in July, the district is seeking legislative rather than legal remedy.

I'm sure Rep. Steve Nass, who still gets a kick out of racial mascots, will be there to help with his one high school mascot specific legislation.