The Party of "Principle" conveniently tries to have it Both Ways, just ask Paul Ryan.

I've always wondered how Republicans were able to have it both ways on almost every issue. It's an obvious ploy that doesn't require extraordinary powers of observation.

Using our own Rep. Paul Ryan as an example, Dana Milbank points to a few recent examples. It's all a game to Republicans, who insist they're doing everything based on "principle." Which in the language of the right, means just the opposite. 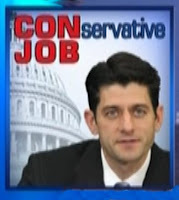 WSJ: Dana Milbank: Republicans need to make up their minds: Is President Obama a socialist or a corporate stooge?

“The president claims his economic agenda is for the middle class. But it’s actually for the well-connected,” U.S. Rep. Paul Ryan … rejecting Obama’s latest proposal for a corporate tax cut. “There’s no doubt that it works well for them. But for the rest of us, it’s not working at all … (Obama is) interested in tax reform for corporations — but not for families or small business.” He further accused Obama of implementing health-care and regulatory policies favoring big businesses and big banks.

That’s rich. Ryan, after all, is the guy who just a year ago accused Obama of “sowing social unrest and class resentment,” of supporting “a government-run economy” and of “denigrating people who are successful.” He has charged the president with leading the nation toward “a cradle-to-grave, European-style social welfare state.”

“Why is it,” Rep. Kevin Brady, R-Texas, asked “that under this White House, Warren Buffett gets a break from Obamacare, but Joe Six-Pack, the single mom working at the local restaurant, they don’t get any kind of break?”

So Obama’s that rare socialist who is in bed with big business? Then again, the point of the Republicans’ critique of Obama isn’t to be logical. It’s to be critical — relentlessly, if not rationally.

Boehner says, “the president is not leading.” Mitt Romney called Obama a “weak president,” and Newt Gingrich called Obama “so weak that he makes Jimmy Carter look strong.” That should come as a relief to Republicans, who spent much of 2010 calling Obama a tyrant. Sen. Rand Paul of Kentucky asserts that Obama is “someone who wants to act like a king or a monarch.” And Rep. Louie Gohmert of Texas still prefers to think of Obama as “a tyrannical despot.” If you’re going to be a despot, you might as well be a tyrannical one.

The GOP lawmakers may be so muddled because their thought leaders can’t agree on the proper line of attack.