In what was an apparent ploy to appear ambushed by nice guy Chris Hayes, Americans for Prosperity's blathering BSer Jenifer Stefano tried to create a liberal "war on women" moment.

Pushing her not stop load of crap on Hayes, who tried and failed to get a straight answer, Stefano came across like a bad prankster fulfilling a bet she made in a bar.

This is the best the Koch brothers could find to debate skipping the purchase of health care coverage?

The one glaring moment that actually shocked Hayes, was Stefano's claim that Medicaid recipients at the 130 percent of poverty mark could make up to $94,000 a year income. She of course was confusing the income ceiling for receiving the tax credit in the exchanges for a typical family plan. She really thought poverty level families made up to $94,000. This AFP stooge even repeated it over and over.

But in the tea party world, directed by the Koch's through Americans for Prosperity, that's what passes for "giving facts," as she put it. When asked about why she feigned concern for those in poverty when she really just wants to just kill ObamaCare...: 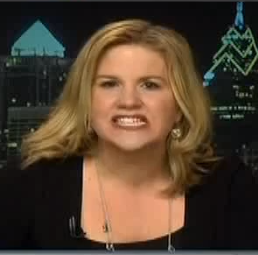 Stefano: "You know nothing about me...you have no idea why I wake up in the morning..."

Stefano:  "You don't know what I fight for, and believe in. You know nothing about me, you know nothing about my family. You  don't  know if I was born and raised in a trailer park. You don't know what I did. How dare you, like Harry Reid, undercut the voice of a woman simply because she disagrees with you. Now you may not like where I'm coming from on public policy, but you have no right to undercut my voice. As a woman I've worked very hard to take on the Republicans...

Hayes: "I've put you on my TV show, I'm not undercutting your voice."

Stefano: "You are undercutting my voice to make it personal, saying I wake up to do this...you have no idea about me or my life. I don't care. This is what I want, stick to the facts. STICK TO THE FACTS. Talk about facts logic and reason. How dare you personally attack me and what I believe in. Typical, because you can't win, unfortunate..."

Facts, like people in poverty making $94,000 a year? My guess is she's now a real hero, despite losing her argument by declaring her victimhood for the whole nation to see. What a pathetic display of ignorance. And by the way, was she kidding about being raised in a  trailer park?


Here are a few relevant comments:


#1 What Stefano is doing is called the Gish Gallop. The Gish Gallop is the debating technique of drowning the opponent in such a torrent of half-truths, lies, and straw-man arguments that the opponent cannot possibly answer every falsehood in real time. Sam Harris describes the technique as "starting 10 fires in 10 minutes." She has this technique down to a science. She had not a single truthful coherent statement during the whole entire segment.

#2 In formal debate, it is also refered to as Argument by Verbosity and/or Shotgun Argumentation... and for reasons of falatious argumentation would have been shut-down immediately. Hayes was far more patient than a I would have been. She is a disgusting piece of work...