Hey, it’s just a "minority of people sensitive to the word censorship," that’s all.

Despite a million recall signatures and hundreds of thousands of protesters at the Capitol, Scott Walker described them as simply representing a minority viewpoint.

Now the strongly Republican area of Fond du Lac wants to make sure their kids learn how to avoid important issues,  just like they do, making things like our rape culture off limits. 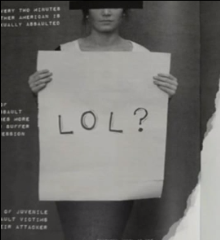 jsonline: Now after a public outcry over Fond du Lac School Board members on Monday heard from students, residents, free-speech advocates and rape survivors who flooded the meeting to speak against enforcing a censorship policy of student media, according to the Action Reporter Media.

"The Rape Joke," a story in the February issue of Cardinal Columns … detailing what she called a "rape culture." It featured the stories of local sexual assault survivors. The article initially generated positive feedback, including from faculty members, many of whom now are criticizing the district's decision to enforce the prior-review policy.

School Board member Eric Everson told Action Reporter Media that the policy is not censorship, just "adult oversight." "This type of thing garners big news because you have a very active and involved minority of people who are very sensitive to the word censorship," Everson said.

Watch Fond du Lac Superintendent James Sebert give his lame reason to censor the students; producing pieces that represent and protect the school district? What does that mean? Following Sebert are a few students stunned by the attack on their paper and their hard work. FDL Reporter:


This insulting behavior by adults may be even a bigger lesson for these students:


Former state Attorney General Peg Lautenschlager (said) “A commonality among sex assault victims is their fear of speaking out. Ms. Kumar was able to articulate for them on their behalf the horrors of what happened to them,” Lautenschlager said, referring to the three female sex assault victims in Kumar’s story. “And then some days later Ms. Kumar finds out that she (and her fellow writers might occasionally) be silenced because somehow her speaking out on behalf of these victims was inappropriate for school conversation.”

You can get more insight into this issue at the Wisconsin Soapbox, always great stuff.
Posted by John Peterson, Democurmudgeon at 3/25/2014 09:12:00 PM