Let me get this right; solving the problem of poverty, along with long term unemployment, has been on Rep. Paul Ryan’s radar for a long time? It’s almost as if the press, in this case AP, is oblivious to his actual plan to get rid of these nagging problems and safety net programs. They also know of his ideological hero, Ayn Rand I hope.

Republicans like Ryan simply want to cut the poor and unemployed loose, having them disappear into society, knowing that there aren't enough newspapers to report all the devastating stories from disenfranchised Americans.

The case of the long term unemployed provided the first test for Republicans last December. They now know the unemployed, who continue to lose benefits month after month, are no longer part of the media focus. The GOP has "disappeared them"…problem solved.

But it’s even worse when an outlet like AP makes it seem like Ryan's “signature issue…(that) dates back to his time…working for former vice-presidential nominee Jack Kemp” has anything to do with really helping them make a living wage or expand the jobs market. His be proud don’t eat strategy is somehow a plan? 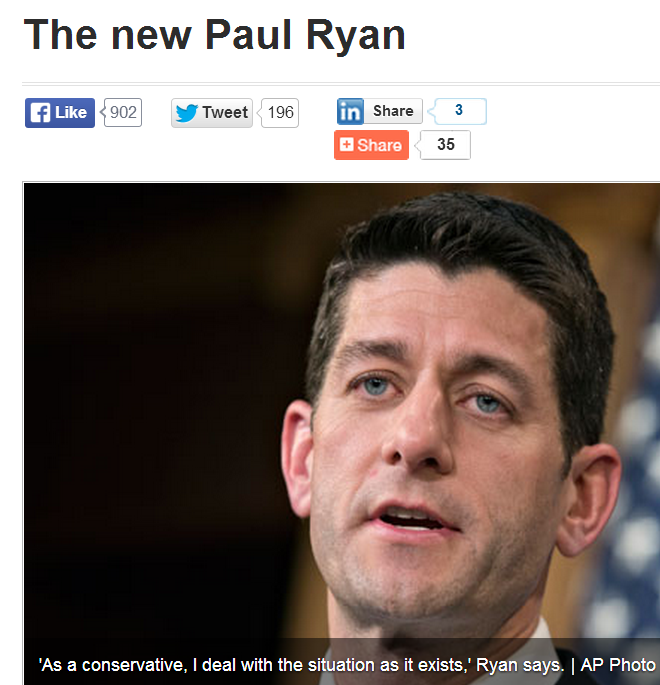 AP: Rep. Paul Ryan is making poverty a signature issue … The Wisconsin congressman had hoped his work on poverty could be a positive: His interest in the issue dates back to his time as a speechwriter working for former vice-presidential nominee Jack Kemp. He has spent much of his time since returning to Congress focused on the issue, touring poor precincts, giving speeches and producing a detailed, 205-page report on poverty, while indicating that he may introduce legislation to deal with the issue.

Ryan hopes the poor will disappear under the flood of cheerful stories about the bullish investor market and rosy corporate profits reports.

The media has already started writing stories about how the long term unemployed are probably here to stay, so we should get used to that simple fact of life.

Ryan’s comment below cements the idea that “government” and “the people” are two separate entities, and that we can’t rely on our elected lawmakers to solve the problem:

"This enforces the idea that this is government's responsibility, and you don't need to do anything about it. That's not true."

I thought that was the reason we had government, or am I missing something?

Ryan Helps the Poor Myth Builds: The AP article ended on this bizarre defensive note about our misunderstood Paul Ryan and his plans to cut the safety nets:

Mary Berry, a professor at the University of Pennsylvania who served as the chair of the U.S. Commission on Civil Rights from 1993 to 2004 (said), "Democrats will jump all over them in the messaging game, no matter what they say, and they won't be given the benefit of the doubt — that's politics."