Walker's "Unintimidated" Foreign Policy threat to world: "My sense is just, you shouldn't point a gun at somebody if you're not prepared to shoot."

Wondering what "President Walker" would do foreign policy wise? Can you say war? In a Slate article titled "Scott Walker’s Foreign Policy: Reagan, Reagan, and More Reagan," Walker makes it clear he's got a hair trigger. And his desperate attempt to look like Reagan explains his brutal in your face push for Act 10 (highlighted below): 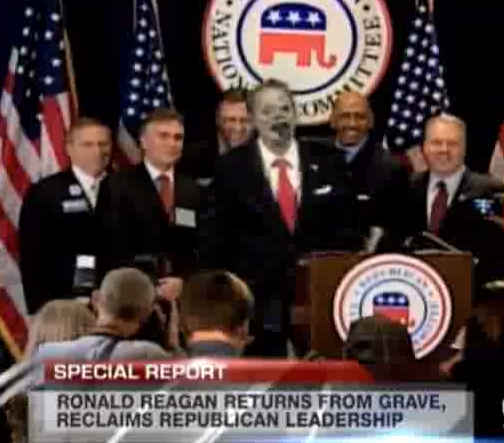 It's interesting that Walker engaged with Phil Klein when the reporter asked him to sketch out some national security views. Less interesting: Walker's actual answer, which led off with the Ronald Reagan reference he has previously used to explain his collective bargaining reforms.

Walker: "When Ronald Reagan took that action against the air traffic controllers, that in my mind was the beginning of the end of the Cold War," he said. "And the reason was, from that point forward nobody doubted how serious Ronald Reagan would be as president. Our allies knew that they could trust him, that he was rock solid. Our adversaries knew not to mess with him."

Like Bush/Cheney, who made countless empty threats, Walker again reinforced his rigid authoritarian "leadership" qualities and warns the American public he's not interested in what they think:

“To me, if you have a strong America led by a strong president who makes serious statements about what they mean not only on national security and foreign policy, but on all other issues, we're not going to be faced with many of these situations because people will know if they're allies we can be counted on and if they're adversaries not to mess with us,” he said. “And when … a red line in discussions about Syria which apparently (he) was never serious about doing anything about, no wonder, whether you were in Iran or Russia, or anywhere else around the world, no wonder people feel certain comfort taking action because they don't see this administration as willing to act. I'm not necessarily encouraging that we draw red lines all over the place. My sense is just, you shouldn't point a gun at somebody if you're not prepared to shoot.”