Thanks to Tea Party Republicans, Everyday is a sequel to Idiocracy!

Every time I come across another tea party candidates plans for America, I flash back to the movie "Idiocracy."

Just imagine the chaos and rampant looting resulting from the following dumbed down political agenda of California teabilly Tim Donnelly: 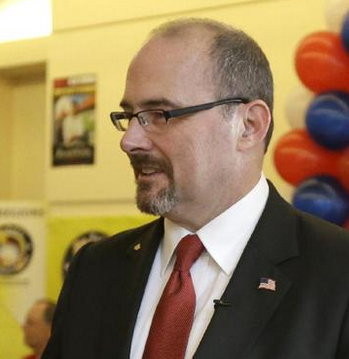 Reuters: California Republicans wrapped up their annual state convention on Sunday with a roar of approval for a charismatic Tea Party-backed candidate seeking to unseat Governor Jerry Brown … Tim Donnelly, a Southern California state assemblyman … a leader for the anti-illegal immigration Minutemen Project, warned of government tyranny and criticized recent efforts in the state to allow transgender children to use school restrooms in accordance with their gender identities. "I want my state back." He blamed government regulation for driving customers away from a plastics business that he founded. "I want my freedom back."

On his first day in office, Donnelly said, he would declare a moratorium on all laws that would restrict freedom, businesses or the constitutional rights of Californians.

Keep in mind now, Donnelly is being at his most “inclusive” at this point, “more welcoming"than ever:

Assemblyman Brian Jones, a San Diego-area Republican said that the sometimes provocative candidate has taken to heart pleas from senior party leaders and the business community to make his message more inclusive. "He's saying the same things, but in a more welcoming manner," Jones said. "He's grown and is paying attention and being responsive to feedback."