I want to hear a conservative explain away Sheboygan Lutheran's "stand with Walker" chant at the Capitol the other day. 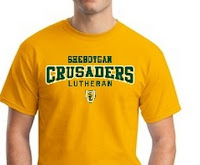 So this is what a private Christian school teaches? Conservative indoctrination? Imagine Martin Luther cheering on the Crusaders, Sheboygan Lutheran's sports team. History would tell you he probably wouldn't be going to to many games:

Christianity Today: According to Martin Luther, no religious cause justified military action against false Christians, heretics, or even Turks. Spiritual enemies must be fought with spiritual weapons alone. Crusade, or holy war, was never permissible.


The following video is making the rounds, from Cognitive Dissidence to Whallah!, showing Sheboygan Lutheran High School students shouting down the Solidarity Singers. This huge touring class even chanted "stand with Walker."

Imagine sending taxpayer money to private schools that teach or, as a right winger would suggest,  brainwash kids into being a vocal force for our authoritarian party leaders. You think this would raise some alarming questions? This isn't a voucher school, but what if it was?
Perhaps teachers have been mislead into thinking they had to leave politics outside the school house doors. I say it's time for experimentation and innovative politically driven instruction. Yeah, that's the ticket.