Unregulated Rent-to-Own rip-off businesses get Republican Thumbs Up in Assembly.

After mischaracterizing the Great Recession as something caused by those greedy poor home purchasers who should have known better, Republicans oddly are quick to lead the poor back into a similar scam that they won’t be able to get out of.

If fact, this legislation encourages defaults and crushing debt. You won’t believe this one: 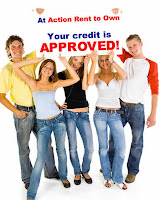 Just how great a business model is that? Only the most clueless idiot would allow something so reckless and irresponsible to open for business in Wisconsin.

Rep. Gordon Hintz, D-Oshkosh, said the obvious…it would allow predatory corporations to prey on the poor.

"The idea that this is a jobs bill — really?" Hintz said. "Only in America do we come up with ways for people to buy things with money they don't have."

These rent-to-own scam companies have set the Walker "open for business" bar pretty low. Kind of makes you wonder just how bad the mining bill was.


Instead, retailers would have to tell the buyer the total cost of purchasing an item through a rent-to-own agreement, and the difference between that price and the cash price. However, the Senate did not take up the measure, meaning it won't become law.

Labels: Rent to Own
Email ThisBlogThis!Share to TwitterShare to FacebookShare to Pinterest