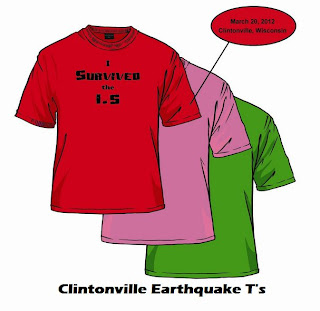 WKOW: The city of Clintonville found a way to commemorate its recent 1.5 magnitude earthquakes that shook the city last Tuesday,

City officials are selling shirts that say "I Survived the 1.5."
City officials say the shirts don't make light of the situation, but celebrate how residents came together when they didn't know what was happening. Proceeds will likely go toward a beautification project in Clintonville.

Labels: Earthquake
Email ThisBlogThis!Share to TwitterShare to FacebookShare to Pinterest