It looks like the Fitzgerald brothers were wrong about the constitutionality of their gerrymandered redistricting maps after all. It’s just a matter of time before they release a statement accusing the courts of liberal interference in the affairs of government. 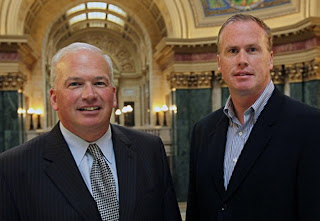 jsonline: New election maps that Republican state lawmakers drew last year for Milwaukee's south side violated the voting rights of Latinos and must be redrawn, a panel of three federal judges unanimously ruled Thursday. The court upheld all the other legislative and congressional districts that Republicans drew last year that favor their party, though the judges criticized the highly secretive methods they used.

In specific, the judges couldn’t have been more reasonable in their sharp criticism of the “process.” "Needlessly moving more than a million Wisconsinites" is no small issue...

thepoliticalenvironment: “As for the other claims, we find that although the drafting of Act 43 was needlessly secret, regrettably excluding input from the overwhelming majority of Wisconsin citizens, and although the final product needlessly moved more than a million Wisconsinites and disrupted their long-standing political relationships, the resulting population deviations are not large enough to permit judicial intervention under the Supreme Court’s precedents. Act 44 has zero population deviation, which is why we find that the intervenor-plaintiffs have no meritorious “one person, one vote” claim. The intervenor-plaintiffs’ partisan gerrymandering claim never made it out of the gate because no workable standard was offered to the court.

Tempers can flare when people are excluded from the political process, whether they are shut out because of their party affiliation, because of their race, because of their economic status, or because of any other trait. Such a contentious atmosphere is neither necessary nor desirable. We know that it is not necessary, because courts hold themselves to a higher standard and have succeeded in drawing successful maps time and again. We should have learned that it is not desirable because of the rancor that it fosters. Some states, like Iowa and California, have adopted nonpartisan systems that seem successfully to have overcome this. New York is seriously thinking right now of taking a similar step, and there has been some talk of it in Wisconsin in the wake of this litigation. But we must deal with the here-and-now, and we therefore must acquiesce…”