Can Ryan get away with this... 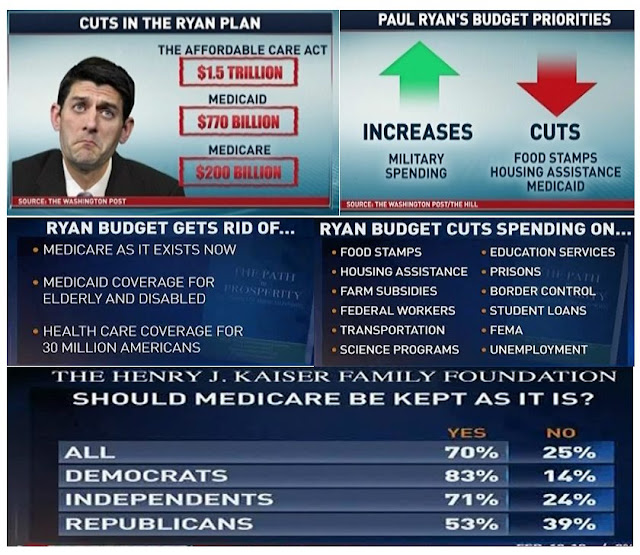 Here's what Thom Hartmann wrote in his email newsletter:

Republicans in Congress unveiled their vision for America today - and if they succeed, the 99% of us are condemned to live like serfs. House Budget Committee Chairman Paul Ryan, himself a multimillionaire, released his blueprint budget for fiscal year 2013 - which includes massive cuts to food stamps, student loans, Medicaid, and Social Security. The budget also dismantles Medicare as we know it - transforming an insurance program into a voucher program, leaving millions of senior citizens on their own to deal with for-profit health insurance companies.

And in a nod to the Republican Party's super-rich members like himself, Ryan proposes enormous tax breaks for the 1% - lowering the top income tax rate from 35% down to 25%. According to the Tax Policy Center - Ryan's budget would give $3 trillion in tax breaks to the wealthiest Americans - all paid for by cutting spending on education, healthcare, and Medicare. Congressman Ryan said about his budget, "It's up to the people to demand ... a choice between two futures. The question is which future will you choose?"

That is the question indeed - will we choose the future in which a middle class can thrive again in America like it did for 50 years after the New Deal until Ronald Reagan blew everything up? Or - will we choose Paul Ryan's path to an Ayn Rand dystopia, in which only the super-wealthy can go to good schools and see doctors, and everyone else is left with what trickles down from the tables of the rich?-Thom