Hyperbolic Headlines...Beyond the news!!! Birthers on Steroids and the Obama Flag.

Are they insane? It appears straight jacketed conservatives have doubled down on their racist media lynching, otherwise known at the birther movement. Here's the coverage in its full absurdity. It's so sick:

If you haven't seen the new national Obama Flag, soon to replace the old stars and stripes, check it out. I'm starting to think we're onto something....from Before its News:


Democrats Push New Obama US Flag: Here Is A Picture Of It (Shocking?) Some Democrats are flying, selling and proposing an Obama faced American Flag. How do you feel about this? What feeling does this picture evoke in you as an American? 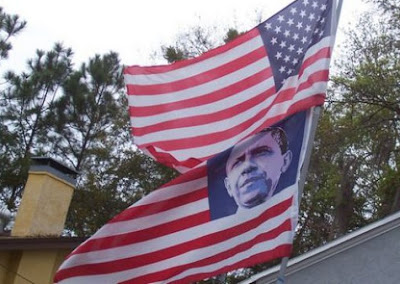 
this is absolutely ludicrous. how long are we going to allow the dismantling and desecration of this great nation to continue? November can not come soon enough. i just hope there is a country left by that time