The most insane thing happened: 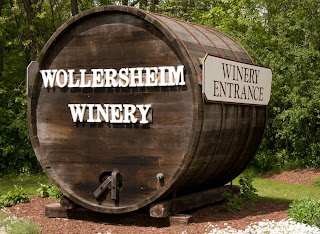 Celebrating its 40th year of operation, Wollersheim's White Riesling ($9) and Prairie Fumé ($10) took best of class … its Dry Riesling and Prairie Blush, and for its Waterfall Riesling and La Belle wines in its Cedar Creek line.

Again, this happened in wine country California. Here’s what Robert Whitley, director of the competition and a syndicated wine columnist, "wrote in a story posted on the competition's website."

·         "Then there was the "man bites dog" narrative in which the Napa Valley thunder was stolen by a winery from Prairie du Sac, Wis.," "Strange but true," he said.

·         Julie Coquard, Wollersheim's vice president and marketing director. "With attention to detail, quality wines can be made here in Wisconsin."

Think about it; this California wine country event featured 1,754 entries in dozens of categories from 13 countries and is one of the largest wine competitions on the West Coast. Holy cow, 6 Platinum awards and Winery of the year.

I remember my introduction to wine, which got me off the stuff for at least 20 years. Grapes grown in the northern part of the country always had a horrible sweet taste to it. Everyone remembers Boonesfarm and maybe TJ Swann…….the ads never really pushed the fact that they were wines, only just mentioning it, just in case you had to call their colored liquids something.

I just happen to have the really catchy TJ Swann jingle (my apologies to Wollersheim for including them in the same post with these lousy wines):