Good news; one of the dumbest and more radicalized tea party partisans, Pam Galloway, is quitting the senate. 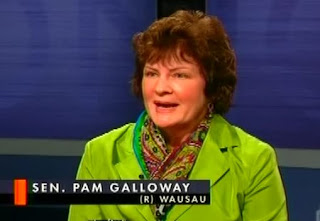 jsonline: State Sen. Pam Galloway plans to resign from the Senate shortly, leaving an even split between Republicans and Democrats ... resigning because of health issues in her family.

The recall election against Galloway would still move forward ... Galloway's name will not appear on the ballot if she resigns before the election.

Pam Galloway was a coldly draconian tea party ideologue. She enforced the "simpleton" style of governing; small government and “a return to the constitution,” whatever that meant at the time.

Let's take a look at how she ripped a hole in reality and progress. Here are some of the destructive policies she’s been a party too:

The Concussion Law: Every parent with a child in school went out of their minds over the stunt Sen. Pam Galloway pulled holding up legislation that would protect our kids from sports related concussions. Galloway’ tea party agenda; freedom and liberty mean no rules, no protections, you take your chances and oh, don’t bother me. She chairs the Senate Committee on Public Health, Human Services, and Revenue. Even more egregious; Galloway is a board certified surgeon?

Abstinence Only: Sen. Pam Galloway helped roll back an existing state law that prohibits school districts from teaching abstinence-only sex education programs. Galloway said the new law is intended to give control over curriculum back to local school boards. Like the concussion law, Galloway didn’t like a one size fits all law; "The Healthy Youth Act was a one-size-fits-all approach."

That’s just so dumb it’s hard not to write a few additional nasty things here, but I won't. Let’s continue:

Concealed Carry: State Sen. Pam Galloway is one of the leading authors of the patriotic sounding "constitutional carry" plan for concealed carry. On WPT's Here and Now, Galloway defended having an untrained, uneducated armed citizenry by using the same tactic conservatives came up with for ending public education; it will help minorities. That's right, poor minorities won't be able to afford licensing classes, so any training requirement puts inner city residents as risk of being unarmed. Galloway is doing it to help minorities. How low can these gun hobbyist ghouls go?

The Castle Doctrine: “Law-abiding citizens shouldn't be forced to run away from their own homes when being faced with an intruder, and they certainly should not have to worry about being sued for defending themselves."

Booze in the morning bill: Galloway said she signed on as a co-author of a bill that would allow retailers to sell alcohol two hours earlier than they can now, after hearing from several local grocers who support the measure including the Wisconsin Grocers Association … she doesn't think the two-hour difference will lead to an increase in alcohol abuse. But Everest Metro Police Chief Wally Sparks said changing the time is a bad idea because a correlation exists between availability and incidents involving alcohol. But to Galloway: "I think it will be helpful. I think the health issues brought forward (in Thursday's public hearing) were overstated," she said. "I think it will benefit people and businesses in our district."

Guns in the Capitol: Galloway, author of the concealed weapons legislation, said she would support allowing people to bring guns in the Capitol. Galloway's comment cames after weeks of complaints from Republicans that they have felt unsafe at times because of the ongoing protests over curtailing collective bargaining for public workers.