Dumb Ron Johnson may have discovered a new way to bash the Affordable Care Act, or any legislation he and his fellow tea party Republicans oppose. Get this:

Demand the CBO create numbers for a fictional what-if situation; and then use those fantasy “estimates” to pummel the nonsensical results as though they were real.

We’re not even dealing in reality anymore. 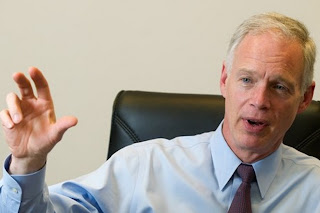 The senators ask the CBO to determine the implications of 30 percent, 50 percent and 100 percent of citizens losing such coverage. "…the American people deserve to know the full range of its potential costs and consequences," the letter states.

Dumb Ron Johnson is so backward, that he’s conflating estimates with “complete and accurate"…estimates?


"Our goal should be to paint a complete and accurate picture of what our health care system, our federal budget, and our freedoms will look like under PPACA," Johnson said in a statement. "I do not believe it will be a pretty picture."

What would be better? More uninsured Americans, family bankruptcies, escalating costs from the private sector, and rationing by insurers. That's the free market system Johnson's tea party is pushing.