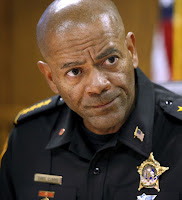 For some reason, Milwaukee voters put their faith in an over the edge, authoritarian conservative sheriff by the name of David Clarke. This guy is a sharply partisan fringe character that should be tossed out of office. Ever since his operating budget was severely cut, he’s been throwing a bully tantrum, even cutting security for a recent Barack Obama visit. Get a load of what he’s trashing now:

jsonline: Milwaukee County Sheriff David Clarke plan to privatize courtroom bailiffs won't fly - at least not for now. Judge Dominic D'Amato ruled that Clarke could not place private security guards in courtrooms, a move the sheriff had already started by issuing a $1.4 million contract with G4S Secure Solutions. The firm, formerly known as Wackenhut, is an international company that provides personnel and technology services.

Here’s a brief history of Wackenhut (check out their drinking party):

Wackenhut's surveillance services were fined in 1999 by a federal district court in Alabama for illegal wire tapping, theft of business documents and corporate sabotage. Mr. Wackenhut, a fervent right-winger, made his money in the 1950s creating dossiers on suspected communists, achieving by 1966 over four million files, or one for every 46 adults in the country. Wackenhut would allow the CIA to occupy positions within the company [in order to carry out] clandistine operations." Wackenhut was also involved in illegal US operations in Central America. Wackenhut is known for providing muscle and force against organized labor and protesters. Their armed guards have beaten protesters at nuclear sites for the Department of Energy. Scott Walker awarded a contract to Wackenhut guarding the Milwaukee County Courthouse (which was later overturned leaving the county with a big legal bill and back pay).

Clarke talks about his "power" all the time:

Clarke argued that he had the power to hire the G4S guards as an emergency stopgap and wanted that to avoid paying full-time bailiffs overtime.

Roy Felber, president of the Deputy Sherrif's Association, said Friday the ruling was "a big win for us. I'm very disgusted that we are trying to privatize law enforcement." Private security guards would be loyal to their company, not to the county.

The bailiff ruling was the second court case this week to go against Clarke. On Tuesday, another judge ordered the county to pay legal fees for two sheriff's captains fighting to be reinstated to their old duties.