Scott Walker pushes: The myth of the "Big Union Boss."

This article from the online Cap Times and editor Paul Fanlund reveals just how psycho Scott Walker is, and how far he's willing to go vilifying organized labor: 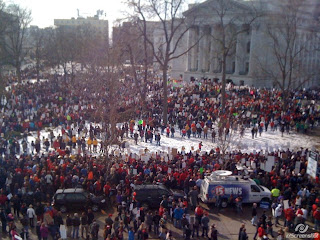 One can see why Gov. Scott Walker and his Republican allies tirelessly peddle the all-purpose fiction that theirs is a noble crusade against the evils of powerful public labor unions and their sinister “bosses.” Walker’s big shtick is a big myth, but he needs to demonize a target to defend his year-long record of taking Wisconsin backwards.

The New Yorker magazine, which published an exhaustive account describing Wisconsin politics: Walker explains the enmity towards him: "I think there’s no doubt that it’s big-money, national big-government unions," adding that "there’s a reason why they have bused people in, and brought people in, and flown people in. That’s not to say there aren’t people on the ground in Wisconsin. But the numbers swelled when people started being brought in from other states."

Walker continued with more of the same in a Wall Street Journal story last week. Through a spokesman, he said, "These out-of-state special interests (such as the national unions) want to make an example out of me so that no other elected official in America will ever dare to take on these government unions."

The New Yorker; "I didn’t view this as a battle with public employees." It became one only with the big unions getting involved. "I should have anticipated there would have been money and resources brought in from other places."

Fellow Republicans stick to the script. Rep. Robin Vos, R-Burlington, told The New Yorker: "The unions are primarily driving this recall. And they are ripping the scab off of an almost healed wound."

Koch recently said of Wisconsin’s recalls: "If the unions win the recall, there will be no stopping union power."

All this hand-wringing about union bosses is absurd and constitutes a whopping, cynical lie. The Capital Times' Jessica VanEgeren ably demonstrated that the architects of the petition drive behind the recalls are anything but the contrived “bosses” Walker scapegoats, but that’s beside the real point. Now, it seems, they want to come down from the hills after the anti-union battle and shoot the wounded. But then labor has long been massively outgunned by business money in Wisconsin politics. Two studies, including one last year, showed that for every $1 that labor interests in Wisconsin give to candidates in all elections, business interests give $12, says Mike McCabe, director for the Wisconsin Democracy Campaign, a political finance watchdog group. While outside spending is somewhat less imbalanced, any notion that “big labor” is a threat based on relative financial might is preposterous.