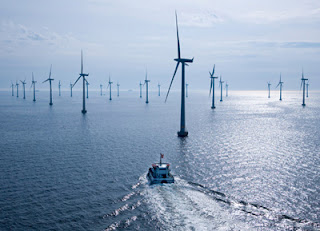 As we all know, energy producing states are in a much better position to control their own destiny and balance their budgets. Texas excluded.

So what it Wisconsin had plentiful oil deposits? Who web e shouting drill baby drill? Sure. What if instead of oil ridges dotting our beautiful landscape, we could build 450 foot wind turbines, and put them way out off the Lake Michigan shoreline, just visible on the horizon?

We have the capacity to produce our own energy, and massive amounts of it. Whether you’re into climate change or not, the wind is ours to use, power homes and businesses, and makes a profit. Not bad really. This could our own version of Texas tea. Yet Republicans in our legislature can’t wrap their little bitty minds around it;

Madisoncom: The Obama administration and five states have reached an agreement to speed up approval of offshore wind farms in the Great Lakes, which have been delayed by cost concerns and public opposition.

Under the deal, state and federal agencies will craft a blueprint for speeding regulatory review of proposed wind farms without sacrificing environmental and safety standards. The Great Lakes have no offshore wind turbines … Critics say they would ruin spectacular vistas, lower shoreline property values and harm birds and fish.

But there are vast stretches of shoreline with no homes. And again, wind turbines would be far enough off the shore that they’ll appear small on the horizon. But take a look at the power it will generate:

The region's offshore winds could generate more than 700 gigawatts, one-fifth of all potential wind energy nationwide. Each gigawatt of offshore wind could power 300,000 homes while reducing demand for electricity from coal, according to the National Renewable Energy Laboratory in Golden, Colo.


Harnessing only a small portion of the Great Lakes' offshore wind could generate thousands of jobs, officials said.

What's the hold up? We’ve got to sign onto an agreement:

Illinois, Michigan, Minnesota, New York and Pennsylvania signed the agreement. The other three states with Great Lakes coastlines, Indiana, Ohio and Wisconsin, declined invitations but could join the partnership later. The agreement is modeled after another between the federal government and Eastern states designed to support wind energy production in the Atlantic and encourage investment in new offshore wind technology.