Republicans: “Recalls are a Waste of Time, Should not be over One Issue!!!” Now Demand One Issue Recalls!!

Republicans just don’t care anymore about how they’ll look, especially when they hypocritically abandon the “moral high ground” to achieve their goal, a recall. 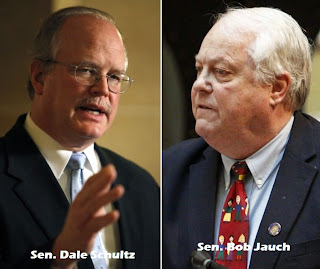 jsonline: A third wave of recalls could be in store this summer as conservatives target one Democrat, Sen. Bob Jauch, and one Republican, Sen. Dale Schultz, over their opposition to mining legislation.

Shirl LaBarre of Hayward filed the paperwork against him Monday. "Sen. Jauch did not listen to the majority of his constituents and, frankly, we've had it," said LaBarre, who runs a plumbing business. "Mining is our history," she said. "It's our culture and it's our future. Well, (Jauch) just threw that down the toilet, and that's coming from a plumber."

One issue recall? Sure, over a take it or leave it offer from a mining company that demanded environmental exemptions that would have trashed the environment across the entire state. Big money mining interests that offered no compromise…now that’s pretty gutsy. That’s how dramatic Republicans have shifted the interests of the state to big business.

Dan Curran, a retired salesman from Dodgeville, created the exploratory committee to recall Schultz because of his stance on mining. Curran said he was disappointed in Schultz's vote on that issue as well.

And the grass roots effort locally to gather recall signatures? Call in the outside professionals.

Citizens for Responsible Government, the group that led the recall efforts in 2002 after the Milwaukee County pension scandal, are assisting the efforts against Jauch and Schultz. Schultz described CRG as "kind of a fringe group from Milwaukee loosely tied to talk radio. They like to spend a lot of time in other people's pastures," he said.