Choke! Everybody's out to get Justice David Prosser!

Here's more on Justice David Prosser, a look that provides for more than one or two OMG moments: 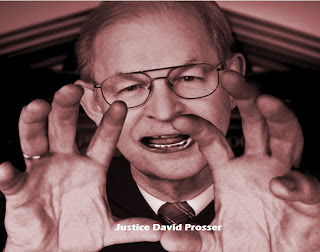 Fox6: On Friday, the Wisconsin Judicial Commission filed formal ethics charges against Justice David Prosser for allegedly put his hands on the neck of his colleague, Justice Ann Walsh Bradley, during a confrontation in Bradley’s office on June 13, 2011.

My conservative friend in Milwaukee even defended Frank Gimbel, the commissions special prosecutor, as a good guy with no ax to grind. I'll take his word for it;

But ideologues who go on and on about "personal responsibility," are always seeking refuge from their rhetoric through vilification of their critics:


“The charges filed by the Judicial Commission are partisan, unreasonable, and largely untrue,” Prosser said in a statement. “They will be vigorously contested because I am innocent.”


“I just don’t agree with that at all,” Gimbel said about Prosser’s statement. “The judicial commission is a non partisan part of the state government. The people that are on there are people of high integrity.” Gimbel also said that he has met with Prosser and his lawyer in hopes of reaching a settlement. However, that did not happen so the charges were formally filed.

After reading the surreal Prosser statement below, is there any question this guy has lost it?

“The charges filed by the Judicial Commission are partisan, unreasonable, and largely untrue.  They will be vigorously contested because I am innocent.  There are two essential points to consider:
(1)    The incident at the Supreme Court on June 13, 2011, was significantly different from what the Commission has alleged.  There would have been no physical contact between Justice Bradley and me if she had not suddenly and unexpectedly charged at me from a distance of about six feet with her right hand in a fist.  By her own admission, Justice Bradley intended to confront me "face to face" "in [my] personal space."  She did not demand that I get out of her office until after contact had occurred.  I never intentionally touched Justice Bradley's neck.  I never "choked" her or put her in a "chokehold." Justice Bradley's assertions that I did are false.

(2)    The Commission has been patently unfair in its handling of this matter.  It has not been interested in discerning the truth. It has been committed to making a political statement.  The Judicial Commission is trying to accomplish through this prosecution what some of its members failed to achieve at the ballot box."

What is this Republican preoccupation and focus on "the ballot box?" Republicans know their base buys into the notion that liberals are always trying to take-away their vote, which energizes them to give these bad actors another chance, all the while getting away with being lousy legislators.