Have we now descended into chaos!!! 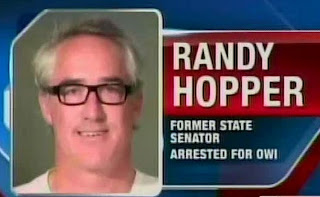 Apparently, laws do not apply to Republicans now, knowing the police and sheriff’s departments are unionized. They can’t be trusted. They have an ax to grind, and payback and vengeance preoccupy their every waking moment. Conservative lawbreakers can now claim liberals are out to get them. Just check the online recall petition site. See previous story:

Now we have the ultimate victim and persecuted Republican; Randy Hopper.

TMJ4: A jury found former state Senator Randy Hopper not guilty of drunk driving. The former state Senator beat a drunk driving case -- because his lawyer argued the charge was a conspiracy built on political revenge. "Honestly, I don't know that I've ever been happier for a client.  What that man has had to endure in the last 12 months is sickening," said Hopper's attorney Dennis Melowski.

Last August, Hopper was recalled -- for his support of Governor Walker's collective bargaining bill.  In October, he was arrested for drunk driving.  A couple of citizens tailed Hopper's SUV and called in a drunk driving tip to the Fond du Lac sheriff.

Oh no, not that? It looks like Verify the Recall has become the defacto Democratic "black list," for future reference.

How would the couple have known Randy Hopper owned the SUV or that he was driving it. Yet, the six-woman jury found the recall petition signers and the police department biased, and out to get poor Randy "bed" Hopper.

Circuit Court Judge Robert Wirtz on April 25 will rule on a charge of refusing to take a test for intoxication after arrest. Fond du Lac County Sheriff’s Office Sgt. Renee Schuster said the pending charge carries a greater penalty against Hopper and can be counted as a prior offense if Hopper were to commit drunken driving in the future. Hopper faces the potential of having his license revoked for a year, as opposed to the six-to-nine-month revocation an OWI carries.