Secessionist talk coming from the Republican side of the aisle is nothing new. I'm thinking southern states, most notably Texas.

So what’s up with Wisconsin's Republican Party leaders denying any interest in secession? It’s just a matter of time, and Republican dominance, that adopting such an idea will take hold. Red states secessionist talk is just part of the conversation.

"Be it further resolved that we strongly insist our state representatives work to uphold Wisconsin's 10th Amendment rights, and our right to secede, passing legislation affirming this to the U.S. Federal Government."

Secessionist Impulse: Who’s surprised the GOP’s amped up hatred of government would naturally lead to state’s rights and secession? Not me, but party leaders in Wisconsin “nudge, nudge, wink, wink” deny it’s a serious problem. From an April 4th article by Dan Bice: 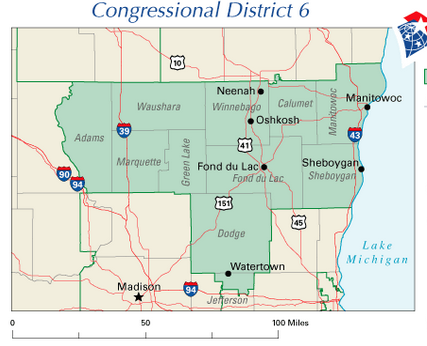 jsonline: Dan Feyen, chairman of the Republican Party's 6th Congressional District, sent a memo to all Republican lawmakers making clear that he did not support the resolution … He noted that the proposals were adopted after many people had gone home.

Wow, nothing wrong with adopting proposals after people had gone home? Sneaky? No excuse.

Joe Fadness, executive director of the state GOP, (said) "Each year, hundreds of resolutions are discussed and debated at the local level before being forwarded to the state.

Funny, patriotic Democrats never seem to include secession in any of their talks.

GOP members of the Assembly and Senate were not taking the resolution seriously. "It makes us sound like Texas," said the veteran lawmaker.

But we are trying to be just like Texas in every way, including secession:

Michael Murphy, vice chairman of the Republican Party's 4th Congressional District, added that he personally supports Wisconsin's right to secede from the United States if the state's voters so choose.

Nine Republican lawmakers came under fire in 2012 for another creative reading of the 10th Amendment. The GOP legislators told a tea party-aligned group that they would back a bill to arrest any federal officials who try to implement Obamacare in Wisconsin. "Just because Obama was re-elected does not mean he's above the constitution," state Rep. Chris Kapenga of Delafield told the Journal Sentinel at the time.

Kapenga must have missed the Bush/Cheney push to create the “Unitary Executive,” a super powered Republican president, lord and master over the other two branches of government. (The GOP has made it clear they would defy popular opinion to install their agenda)

For example; take their “public flogging” of Republicans who don’t agree with the parties Borg like agenda:

Feyen forwarded a second resolution that expressed a vote of "no confidence" in Sen. Luther Olsen of Ripon and Rep. Steve Kestell of Elkhart Lake. The two have come under fire from some conservatives for supporting the Common Core State Standard … The Republican Party's 2nd and 4th congressional districts passed similar no-confidence resolutions for Olsen and Kestell. "It's more of a public flogging, if you will, from our delegation," Murphy told Wisconsin Reporter.

Notice too how the Tenther's write the united States of America, with a small u.

False Equivalence: Unfortunately, reporter Dan Bice seems to think a “death with dignity” proposal by Democrats is in anyway comparable or outrageous as Borg like adherence to state’s rights, Second Amendment remedies and secession. Don’t think so Dan.
Posted by John Peterson, Democurmudgeon at 4/16/2014 09:48:00 AM