Charles Koch beating Harry Reid in Iowa? Moyers on our Slide into Oligarchy.

Bill Moyers' recent focus has been on income inequality and the rise of the oligarchs. Merriam Webster defines oligarch this way: "a person who belongs to a small group of people who govern or control a country, business, etc. " 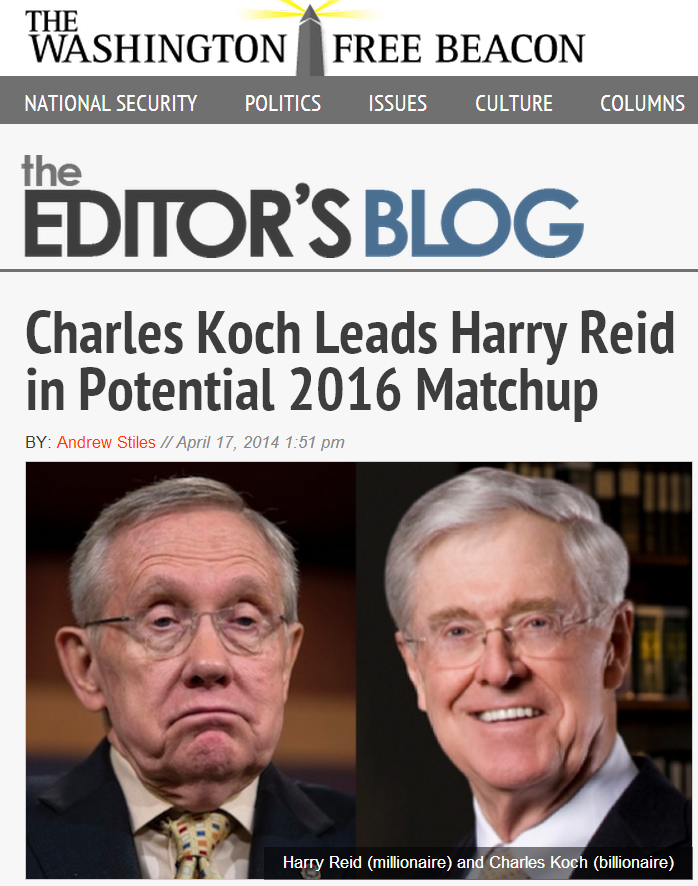 Just more whining and needless fear mongering from losing liberal Democrats shut out by billionaire contributors? Well, if the picture to the right doesn't worry you at all, than we've got a real problem.

The conservative Washington Free Beacon found Charles Koch had an impressive lead over Sen. Reid in their imaginative matchup:


Iowa voters would back libertarian philanthropist Charles Koch by a hefty margin over Senate Majority Leader Harry Reid (D., Nev.) in a hypothetical 2016 presidential race, according to a new Washington Free Beacon poll. The results are in keeping with earlier polls showing that Charles and his brother David Koch are more popular than Reid, despite the majority leader’s breathless campaign to portray the libertarian philanthropy barons as “un-American” and “against everything that’s good for America.” Voters may have tired of Reid’s deranged bluster about the Koch brothers trying to “buy our democracy” while his Super PAC raises money from a handful of liberal billionaires.


A study, to appear in the Fall 2014 issue of the academic journal Perspectives on Politics, finds that the U.S. is no democracy, but instead an oligarchy, meaning profoundly corrupt, so that the answer to the study’s opening question: "Despite the seemingly strong empirical support in previous studies for theories of majoritarian democracy, our analyses suggest that … the preferences of the average American appear to have only a minuscule, near-zero, statistically non-significant impact upon public policy." To put it short: The United States is no democracy, but actually an oligarchy.

But then we kind of had bad feeling about the money pouring into campaigns, didn't we? Here's a much shortened, highlight version of Bill Moyers, with Paul Krugman. See the whole thing here: