I will only blog about this story once in my lifetime. Here it is...

Conservative media is lighting up again over the revelations that an inexperienced speechwriter made up and pushed the Benghazi YouTube video attack for Susan Rice. It’s another failed face saving narrative pushed by the embarrassed fringe news elements of the Republican Party. They just can’t be wrong, ever. But here’s what we know from actual news sources…

The Times' David D. Kirkpatrick writes: "The reality in Benghazi was different, and murkier, than either of those story lines suggests. Benghazi was not infiltrated by Al Qaeda, but nonetheless contained grave local threats to American interests. The attack does not appear to have been meticulously planned, but neither was it spontaneous or without warning signs." Rather than Al Qaeda, the Times says those responsible were local militants that And it was this anti-Islamic video posted to YouTube — “Innocence of Muslims" — that largely fueled the violence according to The Times' investigation.  NBC cites a senior Obama administration official who said the White House does not dispute those findings.

Researching this new and energized right wing “discovery,” I found so little coverage from legitimate reporting services that it would be impossible for anyone to find out the real story, as you can see by the picture here. The latest, according to the rabid right wing: 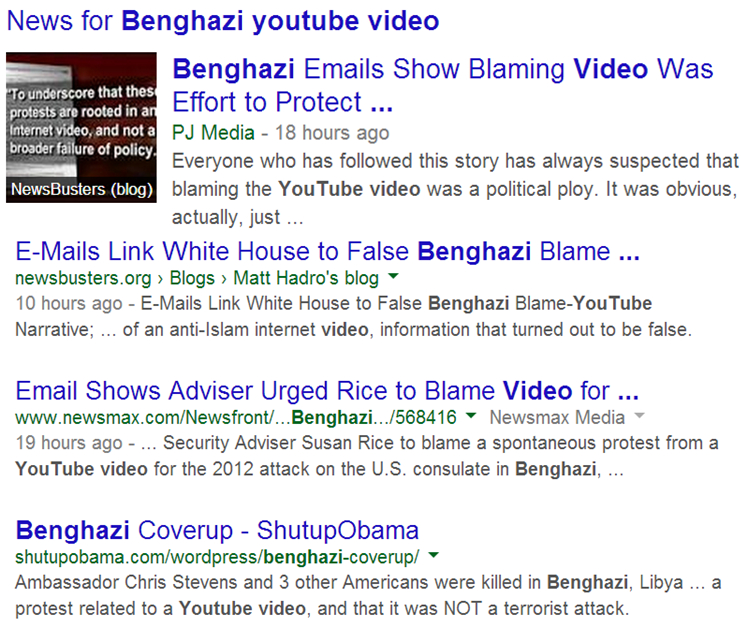 Fox News: "With the subject line 'PREP CALL with Susan,'" Rhodes writes to a dozen members of the administration's inner circle, including key players on the White House communications team such as spokesman Jay Carney, that one of the goals is, quote, 'to underscore that these protests are rooted in an internet video and not a broader failure of policy.'"

Labels: Benghazi
Email ThisBlogThis!Share to TwitterShare to FacebookShare to Pinterest