This odd poll of basically conservative respondents should not be discounted, despite the flaws. The conservative message is winning because it's been consistent and unrelenting. All it takes is a little nudge from outside groups, which is more like a tidal wave, to put rehire Scott Walker. 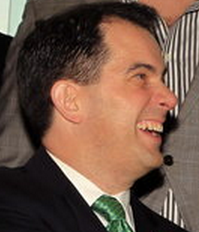 WPR: St. Norbert College's Strategic Research Institute said that 55 percent of respondents said they will vote for Walker while 40 percent said they'd back Burke. "And 57 percent of our respondents think the state is going in the right direction, so it's very close to the numbers with the vote choice ... the governor's approval ratings right now, it's at 59 percent."

The breakdown of the poll is almost embarrassing. As we all know, independents are conservative leaning jerks who don't think it's anybody's business how they'll vote.

Remember, Walker is a rightwing authoritarian. This is the actual direction we're headed.