Hey, both sides do it…like voting on seceding from the United States? Don’t just blame Republicans.

That was the hard sell from Scott Walker to the press, who by the way, bought into it hook, line and sinker. It’s just something that gets brought up… 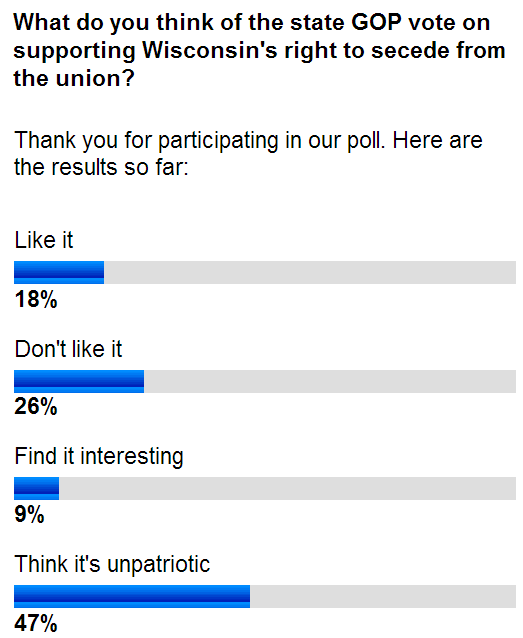 WPR: Walker said it was the kind of resolution that sometimes gets brought up at a state convention. “Both Democrat and Republican activists often have a variety of different issues they debate at caucuses and conventions,” said Walker. “Many of them are mainstream things. Other ones, like this one, are probably a bit off from where a lot of Republican elected officials like myself are at.”

Just "a bit off?" At the state’s annual Republican convention next month, where these same banana Republicans will also nominate Scott Walker, they’ll party line vote to secede. Second Amendment remedies anyone?

And if you've ever watched Fox News, every day presents a new “extreme circumstance” just begging for secession.

The resolution would say the state Republican Party supports legislation that upholds Wisconsin's right, under extreme circumstances, to secede … it is very much symbolic. This particular symbolic vote will take place at a convention where Republicans will formally nominate Gov. Scott Walker for a second term in office.