The First Amendment is under attack again! Republicans to coerce inclusion of "under God" in Pledge of Allegiance!!!

Here we thought saying the Pledge of Allegiance was voluntary, or that the inclusion of “under God,” was voluntary.

Not under the iron fist of Republican “patriots.” We're hearing about seditious behavior in our public schools. Where do you think that got such notions? 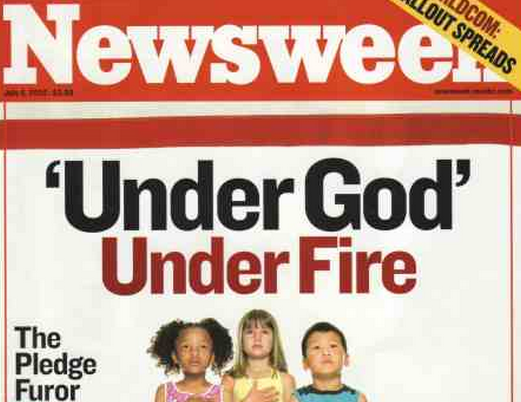 WSJ: The Madison School District acknowledged Tuesday that students at East High School twice omitted “under God” when reciting the Pledge of Allegiance during morning announcements last month, after allegations in a blog post circulated widely among conservative circles this week.

But spokeswoman Rachel Strauch-Nelson said the school has offered the Pledge daily, and has not removed any words from it. But she said that during two days in March, students reciting the Pledge during the morning announcements skipped words on the first day and replaced “under God” — which was added to the Pledge in 1954 — with “under peace” on the second day.

“Both students were followed up with,” she said.

Wow. If anything, I’m encouraged by the individualism and activism of those who chose a different path. But that’s not conservative protocol, and will not be tolerated. 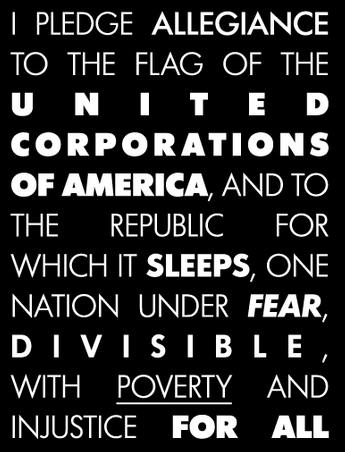 16 year old Benji Backer, who calls himself a conservative activist and columnist, published a post last week on “RedState,” a conservative blog … Backer quotes East junior Samantha Murphy as saying the students misread the Pledge over three days, removing “one nation under God” one day, skipping “under God” the following day and replacing “God” with “peace” on the third day.

Efforts to identify and reach the students were unsuccessful Tuesday.

Gee, I hope we find these seditious teenagers and run them out of town. But junior Samantha Murphy’s mom is just as much to blame:

Mother Jodi Murphy said in an email that “I would think parents, students, staff would be upset that the pledge was changed.”

Perhaps Jodi Murphy could head up a neighborhood watch for what looks like un-American behavior.

But I am encouraged by this:


T.J. Mertz, who represents East High on the board said his immediate reaction was to support the students who may have been acting in support of their beliefs when omitting the words. He said he also applauds Samantha for speaking up for her beliefs. “We want our students to be self-advocating and have beliefs,” he said. “I support them acting on their beliefs.”


Parent teacher organization East High United co-coordinator Laura Chern said her son told her Tuesday that the school’s security guard read the Pledge on Tuesday and he included “under God.”

Perhaps "one nation, under Walker." He's working on it.

I did find this story about the Pledge's origin, which would end the morning ritual in a heartbeat:

Almost no American students are aware of the history of the Pledge of Allegiance. The original Pledge of Allegiance began with the classic military salute (to the forehead) that was then extended out toward the flag. It was known as the "Bellamy salute." It was the origin of the stiff-arm salute adopted later by the National Socialist German Workers Party in chants to its swastika flag ... Francis Bellamy, author of the Pledge, would have opposed the change to the hand-over-the-heart (the hand placed flat against the chest). A modified version of the gesture used the military salute from the chest and then extended outward in the stiff-arm salute. It is frightening to note that Adolf Hitler and German National Socialists also adopted the gesture … the German National Socialist salute may have been copied from American cheerleaders. A government report claims of the Hitler salute: "In 1923 he adored American football marches and college songs.