It will be interesting to see how Republicans defend media questions about the poor test results, IF they’re ever asked by reporters in the first place.

But the spin is already whirling around the topic, as exemplified by this ridiculously deceptive headline in the Journal Sentinel:

Lags? WKOW put the following graphics together that offered the most breathtaking and honest assessment.

Vouchers have been a complete and unmistakable disaster.

The Wisconsin State Journal left the spin out with this headline, "Wisconsin voucher schools show lower test scores compared to public schools." Just as interesting is the opt out penalty, where schools are discouraged from trying to hide their failings by not testing as many kids. The "statewide" voucher schools do not include Milwaukee or Racine:

Of the 272 (voucher) students enrolled in tested grades in the statewide program, 33.2 percent scored proficient and advanced in both reading and math. But that percentage doesn’t include 61 students — or 22.4 percent — that opted out of taking the state tests.

When those who opted out were included in the total and counted as not scoring proficient — as is the case for public school students who opt out — (vouchers) 25.7 percent scored proficient or advanced overall.

Graphics from both the State Journal and Journal Sentinel: 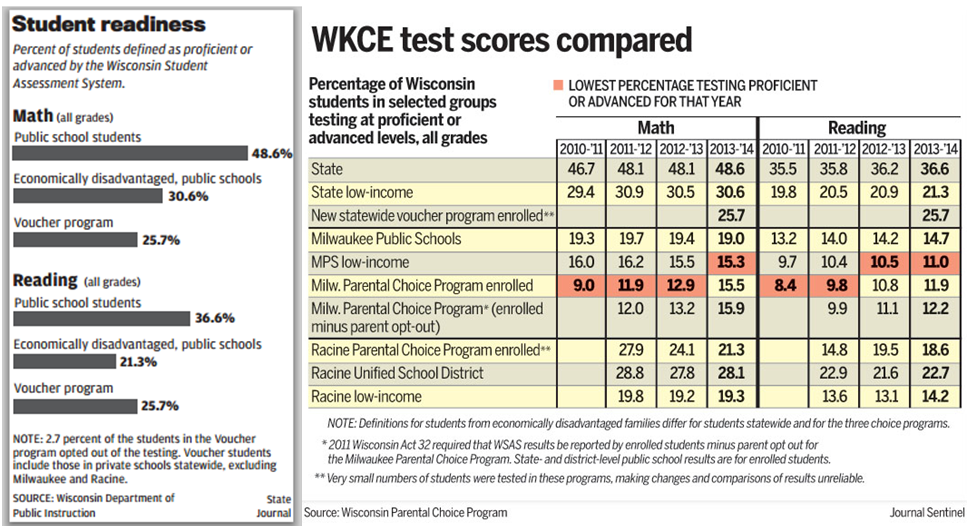