Yeah, someone besides me finally noticed.

For years Republicans have been promising to drop the employer tax benefit that covers their employees. Individuals would have their own portable insurance, but lose their doctors. But then ObamaCare happened and messed up their plan.

Hypocrisy is one thing, but even this was too much for Republicans. Wall Street Journal: 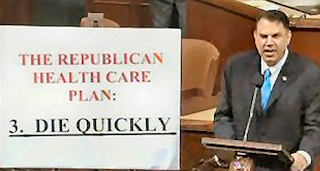 REPUBLICANS SHY AWAY FROM THEIR OWN HEALTH PLAN. Some Republicans are now worried that a GOP proposal to begin taxing health care benefits offered through employers—which would affect some 160 million Americans—would cause market disruptions far more severe and expose the party to its own political peril.

After all the feigned crying over ObamaCare, they just couldn't pull this one off:

The proposed tax change was proposed by President George W. Bush in 2007 and by Sen. John McCain as presidential nominee in 2008. A similar GOP plan in the House has 117 co-sponsors.

"Republicans will walk into the same buzz saw if they aren't savvier and more thoughtful," said Dean Clancy, vice president for public policy at FreedomWorks … Republicans have long proposed replacing that break with a new tax credit for all Americans with insurance—part of a broader plan to sever the link between employment and health care that the party believes would induce consumers to demand lower and more transparent prices, thus trimming health costs.

One of  the biggest flaws in their plan puts everyone in the more costly individual market, no group rates. Republicans just don't understand health care at all, or care too understand it.

Here it comes, a new angle, a new scheme and more complicated than ever:

James Capretta, a senior fellow at the Ethics and Public Policy Center, a conservative think tank recommend capping the tax break available for health insurance through work and finding other ways to pay for additional tax breaks to those who buy insurance on their own.

Neera Tanden, president of the Democratic-leaning Center for American Progress and an expert on health care, said "It is a great irony that there's been such stark criticism of the president for a small percentage of people facing lost coverage," she said, "when the traditional plans of the Republican Party on health care dwarfed anything that's happening from the Affordable Care Act."