The "Paul Ryan is the Jesus" moment.

Paul Ryan has no intention of backing down. None. He is a strict ideologue. When he refused to negotiate the passed senate budget bill, he brought about a government shut down. Ryan wants to cut Social Security, Medicare and Medicaid, and might do so because there are a lot of people who aren't focusing on their own well being 20 to 40 years from now.  And of course the wealthy continue to be wrongly portrayed as job creators when in fact, American consumers are and have been since the beginning of time.

Ryan is playing with the American psyche, and winning. Take a look at how Ryan's politically crafted "wonkish" myth is growing, as reported at Buzzfeed

Blessing? Ryan's blessings also resulted in the huge deficits we're still dealing with and saw during the Bush administration. He voted for every unpaid for spending bill, war and tax cut, because unbridled conservatism is pure. His governing philosophy is similar to the one that ushered in the Great Recession. He preaches how the private sector can do things better, even after that same private sector crashed the global economy.

He wants smaller (democratic) government, and a larger one party Republican system. As we've seen over the last 3 years under Scott Walker, it's a top down self righteous Borg like structure guided by one free market philosophy. 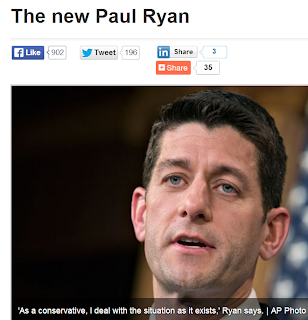