ALEC, THE opponent of Common Core, still not mentioned by reporters.

The starkest example of just how irresponsible the media is now (for not pointing to the real groups responsible for shaping public opinion against anything, especially Common Core), was on full display in the pictured AP article below, from the Wisconsin State Journal. There's no excuse for not mentioning that State Sen. Leah Vukmir's opposition to Common Core and attempts to repeal it may have something to do with the fact that she's the national treasurer for ALEC, Common Cores biggest enemy.

Think it's important? Gee, I wonder. Let's be honest, any article addressing the Republican efforts to repeal Common Core everywhere must include their membership in ALEC. Without that, the public will continue to think their politicians are working for them, and not pushing corporate America's wishes. And the phony "public hearings" held around Common Core will include so many special interests that education doesn't stand a chance of not being politicized. 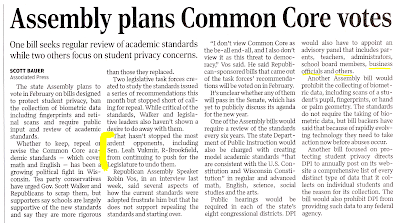