Rightwing Watch sent up this red flag for Americans to take note of, with this tongue in cheek headline: 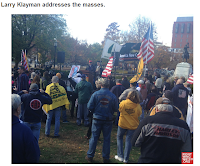 Expected: Larry Klayman predicted that his rally calling for the overthrow of President Obama would draw “millions to occupy Washington D.C.” and that those millions would “occupy parks, sidewalks, public areas” until the president leaves office.

In the end, no more than a hundred people showed up for today’s big event. Nevertheless, Klayman told Tea Party activists that he is still confident that the Reclaim American Now rally will force the president to resign and that grateful Americans will beseech Klayman and his allies to organize a new Continental Congress in Philadelphia.