Want to know how "neo-confederate red" Wisconsin has become? Our own state Republican Representative Chris Kapenga is a major organizer and backer of convening a constitutional convention.

On board with the likes of radio hosts Mark Levin and Glenn Beck, who spearheaded this ridiculous idea, Kapenga's embarrassing participation in this effort should be a wake-up call to voters.

So after breaking the government with radicalized legislation and a record number of filibusters, our do nothing tea party Republican Party wants to fix what they just undermined and smashed? How convenient: 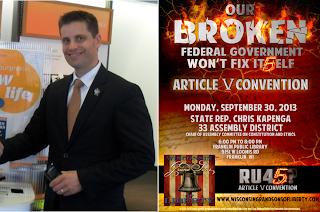 RWWatch: A Convention Of States: The Right's Latest Plan To Amend The Constitution: For the last several months, spurred on by the publication of Mark Levin's "The Liberty Amendments," right-wing activists have been floating the idea of convening a "Convention of States" through which representatives of the individuals states would gather together for a convention to amend the Constitution and reign in the federal government.

Under Article V of the Constitution, "legislatures of two thirds of the several states" have the power to "call a convention for proposing amendments" … The Blaze website reported that nearly 100 right-wing legislators from 32 states met in Virginia over the weekend as the first steps toward turning this fringe fantasy into reality … Saturday’s Mount Vernon meeting was organized by Indiana state Sen. David Long and Wisconsin Rep. Chris Kapenga.