Walker says "I have nothing to do with it!" Oh but he does. National media spotlighting Scott Walker's big decision on racist Indian mascots.

Racism is now an official plank of the Republican platform. With every conservative think throwing in their word salad to disguise racism, Republicans can now use that language to fool themselves while at the same time spread the hate.

Walker Republicans have actually written a law making it impossible to stop or remove blatantly obvious racial mascots. That's how in your face these guy want to be. Leave well enough alone? Never.

This national hot button issue about racial mascots is now on Scott Walker's desk, waiting for his signature. With the media spotlight on Walker now, he's about to make it clear to the nation where he stands on the racial divide. Would he be an inclusive candidate for the nations highest office, or will he let racism fester and grow...on a local small government level as he states below? 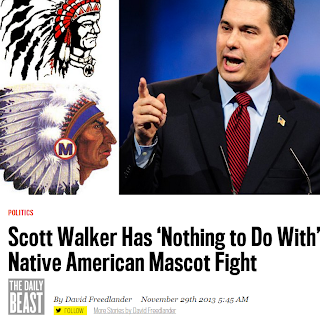 Daily Beast: Battles over Native American names are raging nationwide, with none fiercer than in Wisconsin, where a GOP bill awaits the governor’s signature … and the governor ... finds himself caught in a battle he doesn't seem to want to fight.

“I have nothing to do with it,” Walker said. “Other than that I have to choose whether or not I am going to sign it or veto it, it is nothing that I have advocated. In fact, all the while they were debating it I was asked at press conferences what I thought about it, and I would say, ‘It is not on my radar. If it is not about jobs, lower taxes, improving schools, it is not on my priority list.’”


It’s so hard being the accidental governor...what will he do? He knows exactly what he’ll do, even after feigning disinterest in the whole hot button issue conservative voters want passed to justify their deep seated racist feelings.

“I don’t know exactly what I am going to do with it,” Walker suggested that he favored simply repealing the 2009 law and leaving the decision up to local school districts rather than signing into law the “weird hybrid” that passed this month.