Has Dumb Ron Johnson done or said anything constructive?

Get a load of this oafish dumb ass's message to his frightened constituents:


jsonline: During his 45-minute presentation … Johnson made his case that federal spending as a 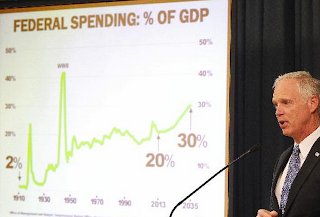 percentage of gross domestic product had grown rapidly and dangerously.

"The size of federal government is the problem," he said. "The root cause of the problem, both culturally and financially. It's so large we can't pay for it. We are bankrupting the country. It's really harming economic growth."

The senator spoke about rising college costs ("The government threw money at the problem."); the Social Security Trust Fund ("We are not running surpluses any more."); the growth of out-of-wedlock births ("I want to help people help themselves."); and the war on poverty ("The $16 trillion war on poverty utterly failed. I would argue that it probably exacerbated it."). When he finished, he looked at his audience and said, "Sorry, I depressed you."

Here were a few important comments:

1. Isn't the honorable Mr. Johnson's graphic interesting? It seems to show that federal spending as a percent of GDP rose more under presidents Reagan and Bush the first, then went down under Clinton and then up again under Bush the 2nd, and finally up at first under Obama and then down.

2. The poverty rate in 1964 was 19.2%. After the War on Poverty, Medicaid, Medicare, federal housing, etc. it fell to 11.2%. For the elderly it is half what it once was. SS is the key factor for them. So fund it, instead of paying a trillion for off budget unnecessary wars. The key factor in poverty's rise to 15.2% since the continuing damage of the Bush recession is the stagnation in the minimum wage.

75% of the economy is based on consumer spending. Paying a living wage to the poor is the key to lowering poverty. The poor spend every cent they have. I don't care if you don't like their choices, but the rich p... their money away on crap even more than they invest. If McD has to charge a dime more for a burger, let them. Johnson should give up his guaranteed salary, health insurance, benefits, etc and live on his millions. This buffoon explaining economics is a joke. millionaire conservatives only care abut one thing- themselves.